Jay’s infectious energy was exactly what we needed for an evening webinar. His enthusiasm for the art of the subject line could get anyone invested in open rates, offers and emojis.

We steamrolled through the best ways to get that all-important open on your email campaigns, with real-time data from Jay’s experience of delivering over 40,000 campaigns for his clients each year.

Marketers are trying all sorts of new tactics after the chaotic year we’ve had, and as Jay neatly put it, we’ve stumbled upon The Accidental Open. Where our unique and crazy tactics pay off. The key here is being brave enough to try new things and A/B test everything we do.

Jay’s first top tip comes with a ‘proceed with caution’ warning. Using a ‘From Name’ in your emails, not a company email address, in b2b, increased open rates by 38% but increases unsubscribe by 68%. So it's definitely one to take with a pinch of salt. But one thing he couldn’t condone is the fake reply & fake forward that means using ‘RE:’ ‘FW:’. This will increase your unsubscribe rate by 135% and can ruin your domain authority.

The reason for this is it’s not cool to trick people into opening your emails, Jay's hilarious example was: the subject line ‘you smell’ will always get an open but not the response or action that you want. So why use it? 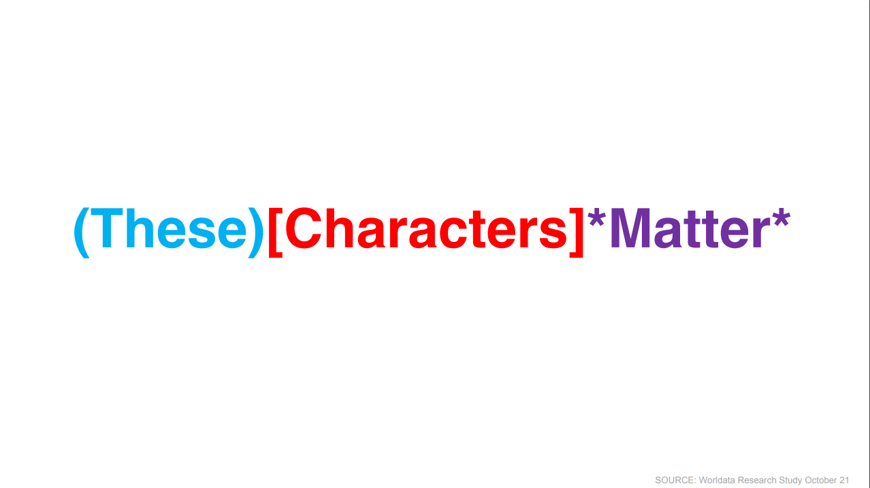 How to Avoid the Junk Folder

One of the things we often get asked is, ‘won’t sending all these emails mean we just go to the junk folder’. Well, Jay summed it up succinctly; ‘you don’t go to junk based on characters or word, it’s all about domain authority.’

This means the words free, open now, emojis or any other ‘risky’ tactics won’t automatically put you in the junk. He’s pretty much saying that whatever works, well, it just works. Because better engagement with your emails makes you a better sender and therefore more likely to go to the inbox. So a better open rate = better engagement = better domain = better open rate, and so the cycle continues.

A trend that Jay has seen companies have success with recently is the ‘oops’ ‘uh oh’ ‘yikes’ subject lines, known as a ‘fake mistake email’, the open rate for this is up 29% in b2b. That’s because, as people, we don’t want to miss out. Mistakes attract us to see what they are. We’re looking for the disaster and it makes us secretly happy when we find it.

The Impact of IOS 15

Now on to something that nobody in email marketing is really keen to talk about. The infamous, IOS 15. The new mail privacy protection from Apple disables the ability to accurately track open rates for anybody opted in on IOS 15. Apple has a 46% market share on phones, so if you use the mail app then you’re probably opted in.

But what does that mean?

Well, a big chunk of your database can no longer be tracked. Apple will tell you an email has been opened when it hasn’t. But Jay had a great tip to help overcome this annoyingly frustrating problem.

You can create a list of non-Apple mail users in your CRM or using a tool, then isolate them and look at their open rate. This gives you a strong indication of the success of your campaign without the skewed data from Apple users. He’s even created a handy tool at Subjectline.com, where you can put in your inflated open rate and it calculates your real open rate. Wow, thanks, Jay.

That’s right it's using ‘…’ at the end of your subject line. This increases the open rate by a whopping 31%. Because it’s so powerful, it keeps us hanging around and in suspense.

Jay’s already given us bags of great tips but he wasn’t done. Up next the bookend emojis this is up 31%. There’s a hesitancy in b2b to embrace the emoji but we’re all human, whether we’re at work or not. If it stands out, we open it. Stop being afraid of the emoji and utilise its attention-grabbing power. As Jay eloquently put it…we’re morons who get entertained by cartoons and reality tv so why would we not like emojis.

Here are some great examples that can be used in your next campaign. 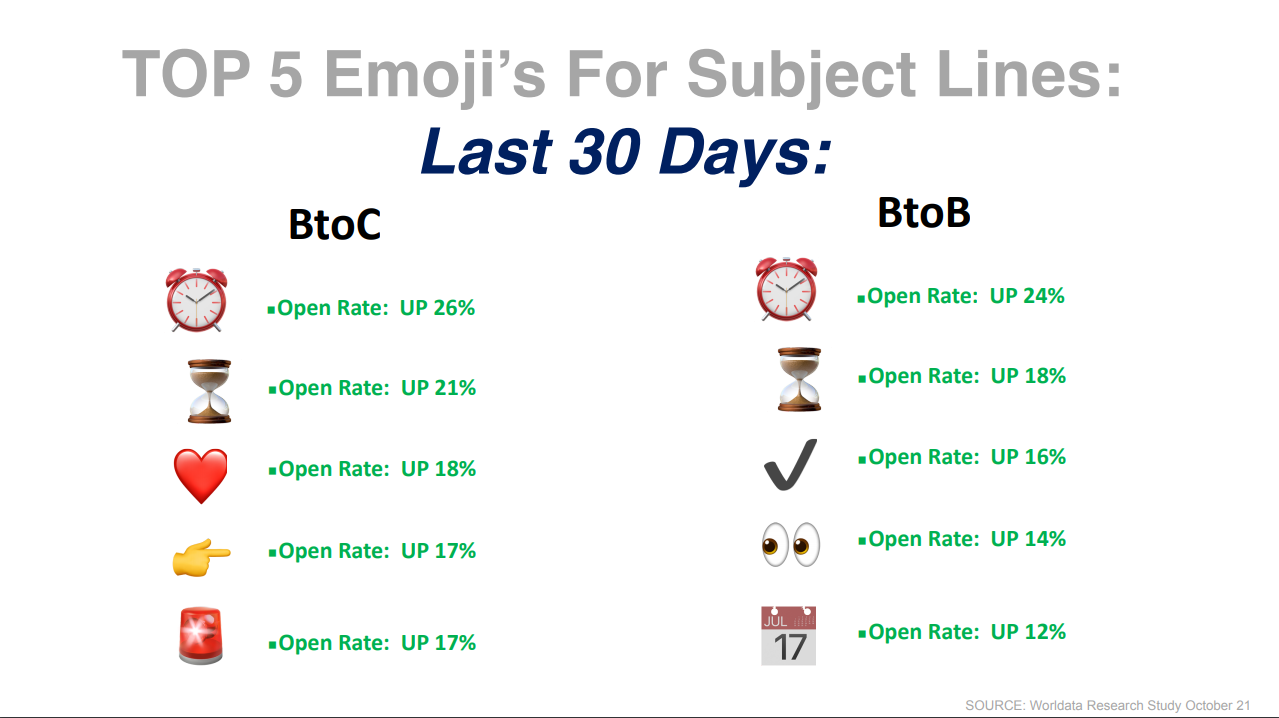 The pull of a list is not to be underestimated, they’re up 34% for b2b open rates. But not only that, they’re cheap, quick and easy to create. And we eat it up, we know what we’re getting, it’s easy to consume, easy to scan, fun to guess, and we just love being proved right when we guess what the top 5 best sit-coms of all time are, or something more relevant to your company.

This next point hit home with me, ‘don’t overthink what we’re sending’. We often want every communication to be as captivating as the new Bond film. But let’s be honest we’re as not funny or clever as we wish to be. So don’t quote movie & TV lines, don’t be creative for the sake of it, don’t be vague or weird. Be realistic your audience wants the offer or the info so give it to them. 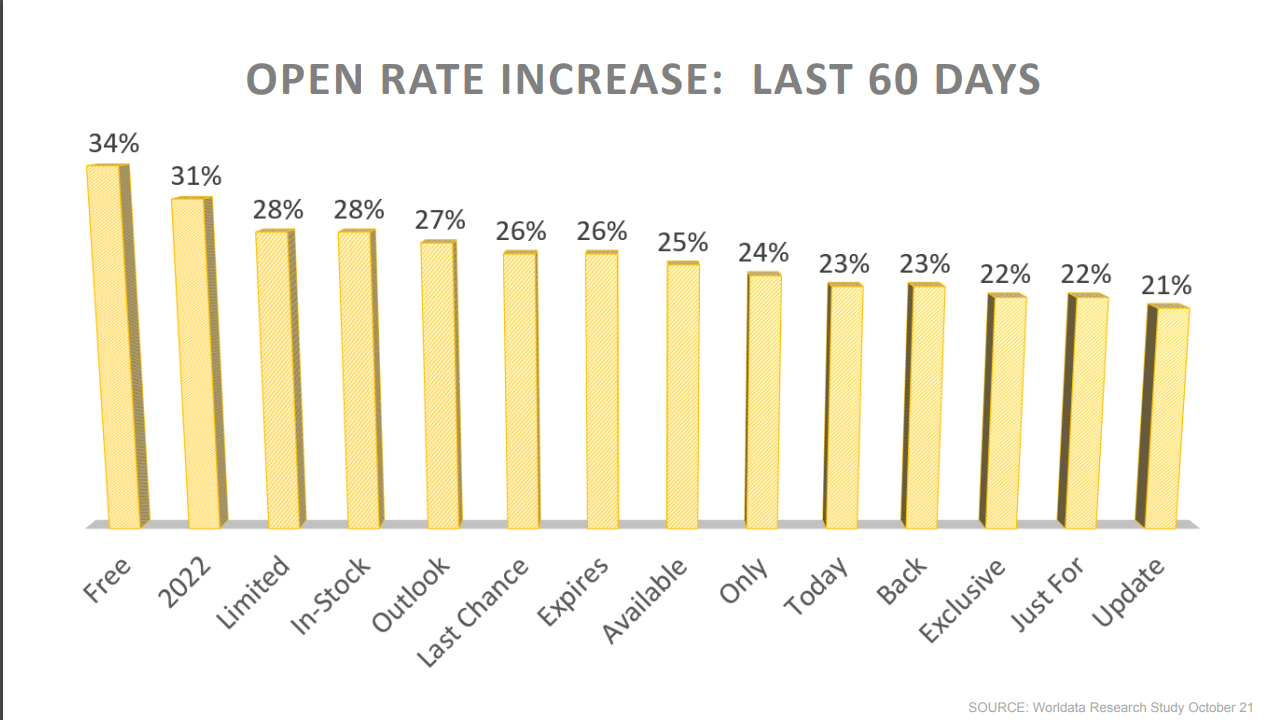 Using perceived scarcity is the no.1 thing you can do. It increases the open rate by 39%. Use the words in stock, available, today, exclusive. And guess what you can use the word FREE, it’s not taboo it’s not going to get you in the junk. That’s a myth. Make your contacts feel special and they’ll engage with your email campaigns.

What a great session, but Jay kept his best secret until last. Using a friendly from, that’s a name, not an email address, that matches the topic of the subject line offer, will increase a b2b open rate by 34%. And just to prove this works he tested sending 3 emails with 3 different friendly from’s vs 3 emails from the same friendly from and for b2b the open rate was up 41%.

All these up to date stat’s are exactly why Jay’s sessions can’t be missed. I hope this blog chock full of great information does Jay’s brilliant session justice. And you give all his great tips a go in your next campaign with Project Prospecta or elsewhere.